How Does It Feel To Collaborate With Henkel?

To answer this question, I recently spoke with Sebastian Kernbaum, the Managing Director of the recycling startup Saperatec, the Head of Henkel Tech Ventures, Paolo Bavaj, as well as Dennis Bankmann and Alexander Bockisch of Henkel Adhesive Technologies to learn about their collaboration.

I should start by explaining that the Corporate Venture Capital ‏(CVC) unit for Adhesive Technologies, Henkel Tech Ventures, functions as the link between Saperatec and the operating business of Henkel. The CVC unit initiated and led the investment process between Saperatec and Henkel, while the operating business of Henkel, more precisely Henkel Adhesive Technologies, is responsible for developing specifically tailored adhesives together with Saperatec.

Sustainability is a topic that is increasingly pushing its way onto the agenda of larger companies – recycling in particular, is a way to dramatically save resources. Saperatec recognized this opportunity long before anyone else and developed a unique separating technology. This technology allows complex packaging components to break down into their raw materials like plastic and aluminum, which can then be easily reused. Henkel Tech Ventures and Henkel are convinced that this solution is a game changer in regard to handling the recycling of flexible packaging. To support Saperatec on their journey to providing a more sustainable future, Henkel Tech Ventures paved the way for an investment and connected Saperatec with experts at Henkel to exchange knowledge. Currently, Henkel and their co-investors are supporting Saperatec in building the first modern recycling plant in Dessau, Germany.

The common goal being – starting the operation of the new commercial plant in 2021. 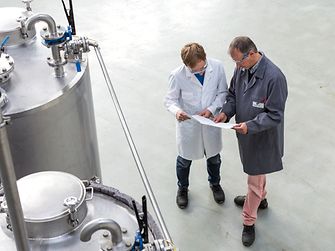 HANDS-ON MENTALITY – CORPORATES HAVE TO THINK LIKE STARTUPS, TOO

What stood out the most, while talking to all the partners, was the feeling that Henkel didn’t just provide financial support, they actually joined forces with Saperatec to drive this promising technology forward. Whenever a problem arises, Saperatec can count on the support of Henkel’s strong network and overcome any hurdle.

I asked Sebastian from Saperatec what he feels makes his work with Henkel Tech Ventures and Henkel special? He answered quickly, “Henkel Tech Ventures shares our spirit. We don’t always have the right answers in the beginning, but we always make it happen. For example, when we first decided to build the plant in Dessau, we needed specific expertise on engineering and the process in general.” Paolo from Henkel Tech Ventures remembered, “I knew an experienced process engineer at Henkel and asked him if he could take a look at the engineering work that had been done so far. Now, he is fully involved in the project and consults Saperatec whenever needed.” This hands-on mentality is a crucial part of working together and a symbol of the collaboration between Henkel and Saperatec. Sebastian adds, “It’s a well-balanced collaboration. From day one it’s been flexible and efficient.”

As I mentioned earlier, working with Henkel means you have two teams on your side. Henkel Tech Ventures takes care of all investment and relationship matters. Whenever you need specific expertise from Henkel or have legal questions, Henkel Tech Ventures is your go-to partner. Sebastian described it as, “The big brother who’s always there when you find yourself in a tight spot.”

On the other hand, product development and service improvement are jointly developed with experts from Henkel. This approach works well for Saperatec. While Henkel Tech Ventures is driving the investment, Saperatec can focus on creating new solutions with Dennis’ team from Henkel Adhesive Technologies.

Ok. I understood why Saperatec works with Henkel, but I was still wondering what Henkel is getting out of collaborating with Saperatec.

WIN-WIN – HOW COMPANIES AND STARTUPS BENEFIT FROM EACH OTHER

But when ventures invest in startups, their relationship often remains superficial, rarely reaching a deeper level than the initial financial support. With Saperatec, it’s a little different. Of course, the startup benefits greatly from the investment, and with it, is able to build its first production plant, which will be capable of recycling 18,000 tons of flexible packaging materials every year; but Henkel can also benefit from the startup. Who knows more about lamination adhesives than Saperatec, the startup that breaks down those adhesives to revive their precious raw components.

Henkel has specifically selected Saperatec as a strategic partner in developing recyclable adhesives. Alexander elaborated, “Henkel Adhesive Technologies is the market leader when it comes to adhesives that bond multiple layers of materials like aluminum. We thought that if we could make an adhesive which is easier to separate from these layers, we could recycle them and solve a gigantic problem in the packaging industry.”

The collaboration has its advantages for both parties. Henkel benefits from the startup’s expert knowledge and technology and Saperatec benefits from the network of a global player – a clear win-win situation. As mentioned by Paolo, Henkel Tech Ventures is always on the lookout for these kinds of situations when scouting for strategic collaborations between startups and Henkel’s operating business.

FUNDRAISING – IS NO FUND RACING

"We produce 18.7 million tons of packaging waste in Germany every year. The potential for Saperatec’s recycling technology is enormous, even when only considering the domestic market. So far, we’ve been supporting them while they finish building their first recycling plant. After going into production, it’s just a matter of scaling and how far we can push the idea”, Dennis from Henkel Adhesive Technologies summarized. Sebastian from Saperatec added, “Our first plant will focus on industrial waste. The next one will tackle recycling consumer waste. There are endless possibilities to grow into other business fields with our technology.”

Henkel thinks ahead. It’s not about short-term profit maximization. When it comes to startups, they look for visions and sustainable solutions that change business models in the long term. Saperatec is a perfect fit. Rounding up our conversation, Sebastian stated: “I want recycling to be considered as early as in the design process of packaging. That way we can really help our planet.”

Hey, I'm Chris. As a copywriter and journalist, I write about startups in the field of adhesive technologies. In interviews with founders I try to draw a realistic picture of their work and how they collaborate with their investors. With my work I want to help promising startups to find out what investment-way fits them the most.